Last week the Federal Bureau of Investigation arrested a New York man for building a 200-pound bomb he planned to explode on the National Mall in Washington, DC on Election Day. The arrest prevented the execution of his deadly plan. Had this man succeeded in carrying out his crime the consequences could have been disastrous. The casualties inflicted by such a device would be determined by the plotter’s ability/desire to detonate the explosive device at specific times in high visitation areas. 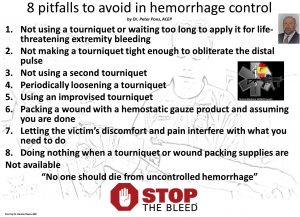 A critical factor that would determine the lethality of such a bombing on the National Mall would be the ability of the United States Park Police (USPP) to respond to the event. Despite numerous calls from the United States Park Police Fraternal Order of Police (USPPFOP) during the last few years, the National Park Service (NPS) still hasn’t provided the USPP with the staffing, medical equipment [e.g. medically certified tourniquets (See Pitfall #5, Figure 1)], and the training needed to effectively respond to mass casualty incidents. Given the threat  and the potential consequences immediate action must be taken to fix this reckless NPS policy. Lives will someday depend on the ability of USPP Officers to swiftly end the threat and effectively treat mass casualties. Officers must have the staffing and equipment needed to accomplish their vital mission.

Some examples of previous calls for action on this critical issue: