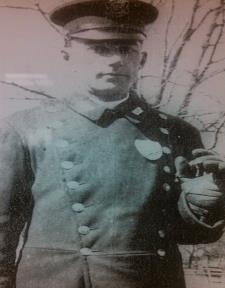 The death of Officer William J. Grissam, while in the line of duty, came under mysterious circumstances. At about 5:15 a.m., on Sunday, March 20, 1932, Officer Grissam was discovered lying unconscious in the street at John Marshall Park at Pennsylvania Avenue and 4th Street NW. The bicycle on which he was patrolling was found nearby with damage to the handlebars and frame. He was taken to Emergency Hospital by a passing motorist and died shortly thereafter.

Investigators first explored the possibility that he had been struck by a hit and run driver. This conjecture was soon dismissed in favor of the theory that the 54-year old fell from his bicycle after suffering a stroke.

The coroner’s report revealed that Officer Grissam had sustained a fractured skull and chest trauma. The investigation revealed dents in the fender and rear license of a parked car at the scene, it was determined that the officer’s bicycle had collided with the unattended vehicle and injuries in the fall caused his death.

Officer Grissam, a 15-year veteran, was survived by his wife and two daughters.