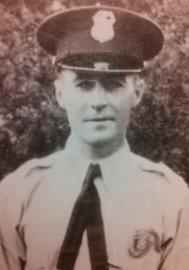 Officer Thomas P. Fogarty died at Walter Reed General Hospital (Walter Reed Army Medical Center) because of injuries sustained when an automobile collided with his police motorcycle, in Rock Creek Park, on August 6, 1941. Officer Fogarty was rounding a curve on Beach Drive near Military Road when the crash occurred. He was 52 years old and had served on the United States Park Police for 25 years.